As usual my Obon holiday was jam packed! It’s hard to do much during the day as its so so hot. Luckily most of the events we attended were night time activities. 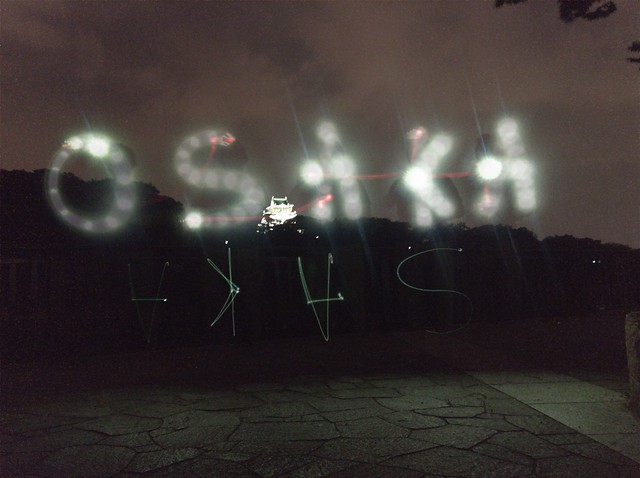 END_OF_DOCUMENT_TOKEN_TO_BE_REPLACED

Fireworks are definitely a summer event in a Japan, and what’s more is you can buy your own fireworks pretty much anywhere (convenience store, supermarket…) and hold your own show!

I really wanted to try Japanese sparklers, your meant to hold them upside down instead of straight out like we do in the UK.

First I tried the sparkers…

You can also stick them in the ground.

The pack had many different types, most of which you hold in your hand and ignite.

This was in my hand!!

These were snakes, like mini Catherine wheels on the ground.

James with a dragon firework and the castle in the background.

Even Rilakkuma and Korilakkuma came to enjoy the show.

For less than ¥1000 we had a lot of fun, if you haven’t tried them yet you really should!

I can’t wait to try these next!

So far this summer I hadn’t seen any fireworks, I missed Osakas biggest fireworks Yodogawa Fireworks as I was working.

Instead I dragged James to Ikeda fireworks as my last chance to see a fireworks display this year.

Also I thought it was my last chance to wear yukata too, so even though I risked looking like a wanna be gaijin I wore it.

It was really busy, but we seemed to find a good spot on the left hand side of the river with almost a 360degree view of the sky.

Woah so pretty, the fireworks were pretty gentle and subdued but all the better for it! There were a few experimental ones, the show started with a countdown in the sky but some numbers were back to front or upside down! We also spotted some hearts, stars, smiley faces and an attempt at Doreamon.

Afterwards we hid in Torikizoku to enjoy the air conditioning and a cold beer before fighting our way back to Umeda on the train.

James said he enjoyed it more than the Yodogawa Fireworks, the atmosphere was a lot more relaxed!

I’m going to jump ahead in time a little to post about the fireworks over the Sumida River on 28th July.

I had been really looking forward to the fireworks and had read online that it would be busy and some people sat in their spot from the early hours of the morning.

Seeing as Gion matsuri and Tenjin werent too bad we decided to wing it and met some friends at Asakusa Station at 6pm (fireworks started at 7.05pm!).

Oh my days it was busy!!! We had to change trains at Ueno and the staff were pushing people on the trains. We had to wait for 3 trains to pass through before we got to the front and witnessed a lady get her shoulder stuck in the doors, instead of pulling her off two guards put their weight behind her and shoved her in. I just stood there jaw slack not quite believing it!

When we arrived (late) it wasn’t any better, we stood in line with what must have been thousands of people waiting to cross the bridge.

There were quite a few people having rooftop hanabi parties, including two men on the top of some scaffolding!

Just after 7pm as we were slowly edging over the bridge the first fireworks started to go off. First to our right, then our left, right, left…then both!! It was hard to know where to look!

We tried to take our time crossing the bridge as it had the best views but the police were ushering people on. They had a neat system of letting people through in batches then coming up in a line behind them with rope to move them on!

After we’d crossed the bridge we saw people sat in a line in an alleyway with one spot left-so we grabbed it! Opened some wine got out our picnic snacks and had a small hanabi party! The group next to us looked like they’d brought their dining table and chairs out!

The fireworks went on until about 8.30pm then we walked around the festival stands at Senso-ji and had some peach kakigori (shaved ice).

As you can see I got in the festival spirit and wore my yukata. I’ve seen quite a lot of girls (esp gyaru) wearing ‘sexy yukata’ I’m not sure I like it!

What do you think?!