After watching 5 games and having two cancelled due to heavy rain this season I finally watched a winning match – against the Giants no less!

The Yomiuri Giants are number 1 in the league and Hanshin Tigers are number 2, so it was an important game.

Before the game we stopped by the Hanshin department store Tigers shop to buy balloons and I picked up a new shirt in pink!

The game started at 6 but we headed over early to take in the atmosphere at about 4.30pm.

We saw the infamous Hanshin dog!

She wouldn’t look at the camera for me! Too cute!

About 5.30pm we took our seats and watched the opening ceremony, they had the first pitch by a veteran player and the cheerleaders danced with Lucky. 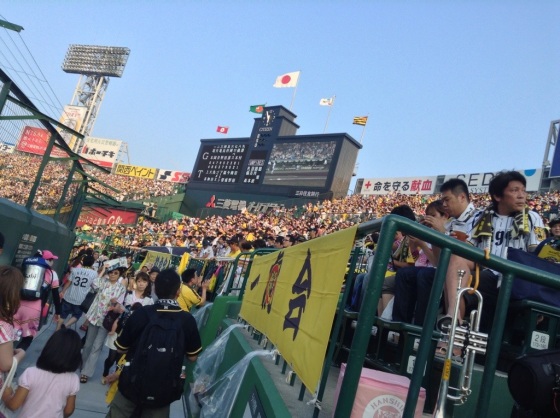 Our seats were really good, right inline with the batter. As usual the Hanshin fans were really welcoming and when we got our first home run we all jumped up and high fived! 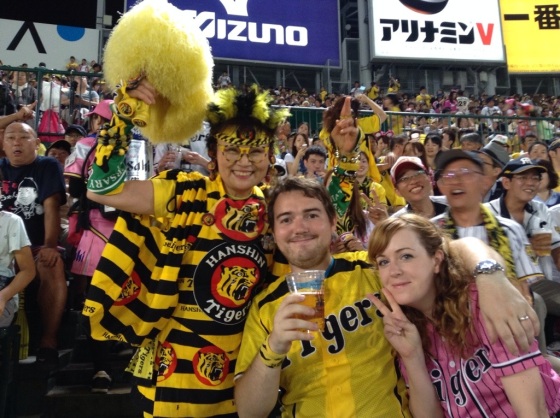 We were lucky to be introduced to this lady, the Tigers oba-chan. I hear she travels to every Tigers game around Japan!

The Giants didn’t even get one home run and we won 3-0! Woohoo. To celebrate we set off more balloons!

We sang every Tigers song in turn, and then did it all again!

At the end they named the player of the game, there were two actually and they gave a small speech and interview.

On our way to the station a large crowd of fans were gathered under the bridge singing Tigers songs together in the dark so we stopped and joined in for a while.

Then at the station we bumped into some fans we met in June when we went who remembered us, one said he couldn’t believe we’d won and I’d been there as I’m such bad luck!!

I hope we can go to another game before the season finishes! A special thank you to the lovely lady who got J the tickets, I had so much fun, thank you!