I visited Takayama and Shirakawa for a weekend break from Osaka, I had such a fantastic time. There is too much to put in one post so I’ll break it into two…the Shirawaka part will come soon.

It’s a 5 hour bus ride to Hida Takayama (飛騨高山) from Umeda, we had 2 or 3 stops at service stations along the way though and I was able to sleep a little seeing I got up at 6am!

As you get close the scenery changes, there’s much more snow and you go through millions of tunnels as it’s so mountainous.

We arrived around 12.30 and walked the 10 mins to our hostel, we couldn’t check in yet so left our luggage and saw on the notice board that there was a Sake Festival happening…I grabbed my camera and off we went!

We caught up with it along the river, and some man offered me his place holding a float! 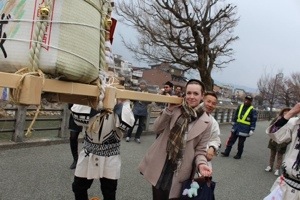 We followed it a bit and then went down the old road, it was super busy and had lots of traditional shops. 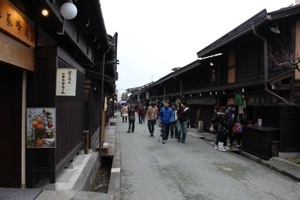 The weather turned pretty nasty and was raining, but everyone was still enjoying themselves!

At 2pm we went to the morning market area for the festivals sake toast! It was to celebrate the new sake season. We got some free sake and joined in! 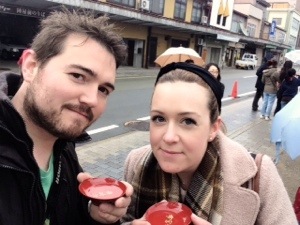 We sat for a while, had some more drinks, and J bought some special festival sake, it was bottled in the last week or so (March 2014!).

I bought a cute kanazashi, we shared some Hida Beef stew and a Hida Takayama burger! It had apple butter on it! Yummy. 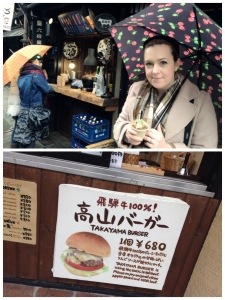 After that we went back to the hostel to check in. We wanted to go to an onsen and saw info for a private onsen at a local hotel resort for only ¥3150. The lovely lady who worked at the hostel rang ahead and booked for us for later that evening.

Our room was ryokan style and had a double futon. It was very cute and comfortable. We relaxed a while and then headed out for dinner.

We stumbled upon a nice izakaya by the station. We ate some tuna and avocado rolls, natto and cheese, drank some highball mojitos and had beef seiromushi.

For dessert we had the delicious parfait!

By then it was 8pm and onsen time! :) We weren’t sure what to expect as the info was not so clear, we were told to go in the gift shop of the Green Hotel and ask at the help desk. We were led to a room at the back where there was this… 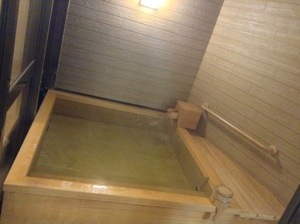 We enjoyed 45mins of soaking outside under the night sky. Ahh… We were so hot we walked home past piles of snow and ate ice cream.

I was so tired and now so relaxed I had a celebratory glass of sake, climbed under the covers and fell fast asleep.

One thought on “Japan: Hida Takayama”