It was Japan’s birthday on Tuesday 11th Feb so I had a 3 day weekend! Yay! Lona my dear lolita friend from Osaka moved to Seoul in June, so I decided to visit!

Luckily for me Lief were having a reservation tea party for their new series Carousel Theater the same weekend, and I was lucky enough to get a ticket.

When I arrived in Seoul I was surprised to see snow! 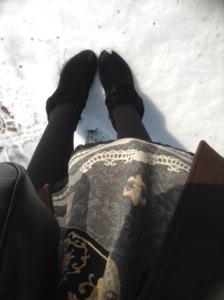 I dropped my bags off at my hotel and headed right to the party.

Everyone was so sweet and helpful to each other, tieing bows, fixing hair etc…reminds me of the grooming part in the Deerstalker Documentaries.

The dresses. The design is so intricate, in real life you could see more small details. It definitely reminds me of APs Puppet Circus with the gold detailing and red fabric. If you covet that dress then this is a must buy. It was great to see everyone else in Lief clothing and get aquatinted with the brand, and meet Sora the designer <3

The report on the party is on their Facebook page, so please take a look!

After the party we went around the local area of Dongik where one of the arty universities is. We took purikura and did some shopping!

I bought many things from Etude House!

We stopped by the Hello Kitty Cafe for a coffee. 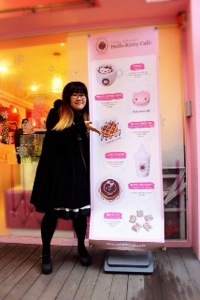 Actually I had an Earl Grey latte and it was delicious!

We did more shopping and walking about until we got hungry and went for dinner. We ate spicy belly pork that came with loads of sides and it was delicious! And so cheap, only ¥1500 each!

After that I headed home in the snow as I had to check in properly.

The next day I tried getting up as early as I could to go sightseeing! I was out the door by 9am. Around the corner from the hostel was Changdeokgung Palace. I was looking forward to seeing something cultural….but it was closed on Mondays. Waaaa. 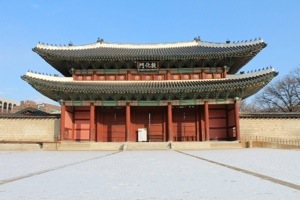 I checked online and luckily the other palace Gyeongbokgung Palace closes Tuesdays. Yay. It was only two subway stops away and I arrived in time to see the changing of the guards.

So you can see the view the guards get is this…

There wasn’t actually anything to see at the palace apart from the buildings themselves, but there was an area for trying on traditional Korean clothes, but it was full.

After that I had some time so headed to Myeongdong for shopping!

I bought a few more small items in Etude House and Holika Holika. Including some great ‘After Drinking’ face mask sheets.

I met up with Lona and we went for spicy chicken for lunch. 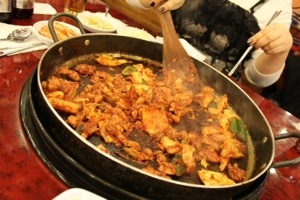 More shopping ensued and we left to go to the market area to see some craft items. 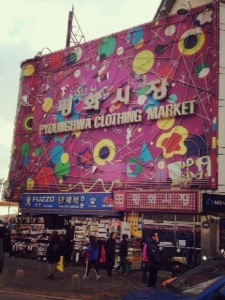 Oh my gosh, the craft market had so many floors of craft items – fabrics, buttons, accessories, ribbon…it was paradise. There was so much choice though I didn’t know where to start. 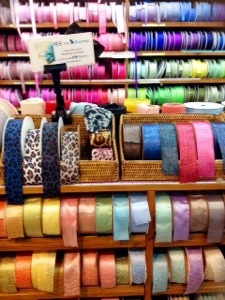 I bought some gorgeous ribbon and small accessories items, now I’m back home I wish I could go back in time and buy more!

Our next stop was Gangnam, basically so I could do this.

But we browsed the shops in the station and went for dinner. It was difficult to choose what to have, Lona recommended some Korean noodles. I was totally blown away by the food.

Cold noodles in a slush puppy of iced soup. It was so yummy like vinaigrette you put on salad. You also got a side of bulgogi (BBQ spicy meat) and hot peppery soup. My new favourite dinner.

After all that excitement we went to Anguk just north of my hostel where there is an old street with traditional crafts and gift shops. Sadly it had already closed up for the night, we just made it in time to stop by this unusual shop. 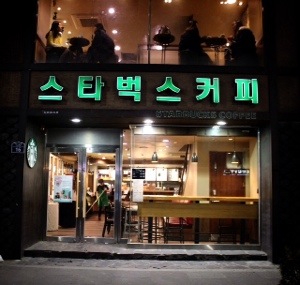 Starbucks! I got J a Seoul edition thermos mug.

We had one last drink (with a side of potato pancakes) before saying goodbye ;( and then I walked home in the snow.

I had such a great time in Seoul and a very loli holiday!

One thought on “Lolita: Loli Holiday in Seoul”