I went to USJ for the first time on Monday, even though I only live 25mins away!

The main characters for USJ are Elmo, Snoopy and Hello Kitty, and the main rides are American Dream/Backdraft, Jurrasic Park, Spider-Man, Jaws and Back to the Future.

First we queued for American Dream, their big roller coaster. We waited just over an hour even though the wait time was 110mins. It was a big drop to begin with and it made me scream! I was mostly scared as thought my safety belt wasn’t the most secure and could easily slide out backwards! 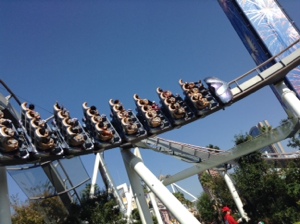 The ride travels all over the park and through some buildings!

Then we walked around, went on the Backdraft experience, had some food in the diner, and went to Jurrasic Park!

Maybe my favourite of the day! The dinosaurs looked really good, and the big log flume type drop at the end steep!

Afterwards we relaxed a bit and took in the atmosphere, we sat in Amenity the Jaws village and had a beer over looking the lake.

You can see the Harry Potter attraction being built in the distance, it should be ready late 2014. I can’t wait!

We could see the parade starting around the lake so walked across to check it out.

The parade was Carnival themed and there were lots of dancers shaking their asses! People in Halloween costume could join the parade as part of the Costume Party section, I liked seeing the huge Hello Kitty and Bert & Ernie! 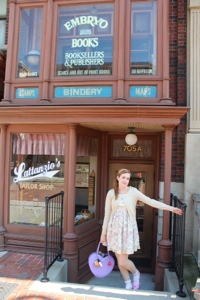 The sets around the park are really good!

After the parade we went to the Back to the Future ride, which didn’t half give me whiplash! Owie. By this time it was dark and the zombies were due to be released at 6pm.

Lots of hooded figures came into the park, dressed like dementors and went into the studios. After an announcement and countdown zombies came running and screaming out the sets! Argh! 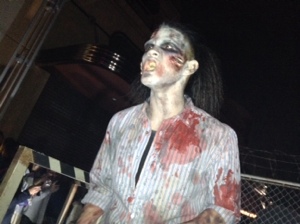 This guy was really good, he had a chainsaw and kept lunging at groups of people making them scatter! When Thriller started to play all the zombies lined up and did the Thriller dance!

After 6pm some rides also become Halloween themed, such as with Sadeko or Jason taking over. We went on the Terminator tour in which Sadeko made an appearance! Clips of The Ring video cut into the Terminator tour one and at the end Sadeko herself appeared and killed the host! Waa. So good, and a little scary!

End of the night zombie round up! 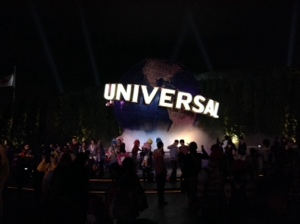